So the other night my little Hobbits were running around and dancing to music. For reason that still has me bewilderment, my oldest  thought it was a good idea to go under the coffee table… Yeah you can kinda see where this is going haha. So I go into my room thinking I might read or maybe get some WoW time in. Then I hear this crashing noise. Then the screaming/crying… Every parent know this sound haha. So as I go down the little hallway I have, Lilly meets me half way holding her head crying and this is what I see. 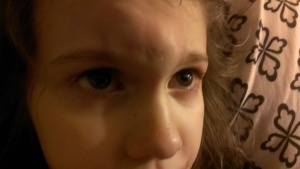 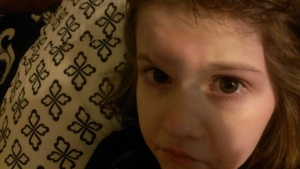 I mean this “Goose Egg” as they call it. Was about the size of a silver dollar, maybe a little bit bigger. I felt so bad for her, still do. It has gone down some over night.. But it looks like she got into a bar fight and won HAHA!

Found this helpful site http://www.simple-remedies.com that gave a good step by step on what to do with a “Goose Egg” (listed below). Also they a lot of helpful tips on just about everything..

Goose eggs on the toddler’s head should not be a major source of concern.

It may appear huge but rarely has long-term effects.

Parents would be reassured to know that the child’s forehead and scalp have thick skin and tiny blood vessels, acting as cushion from the impact.

The size of the goose egg does not indicate severe damage or injury.

Check to see if the areas surrounding the goose egg are not swollen as well.

The swelling would usually subside in days or a week after the incident.

Check to see if the areas surrounding the goose egg are not swollen as well.

The swelling would usually subside in days or a week after the incident.

How to Treat a Goose Egg on Forehead

If the child suffers from headache, give acetaminophen for pain relief.

Put a stop to the bleeding by applying pressure to the cut with a clean cloth.

Place an ice pack on the goose egg immediately. It will help decrease the risk of potential swelling. Make sure to use a clean dish cloth or towel with which to wrap the ice pack.

Observe the child for imbalance, loss of memory, vomiting and severe pain, all of which are warning signs of possible head injury.

To be on the safe side, consult the doctor to rule out serious injuries.

The problem is more than just a mere goose egg, if the following warning signals are seen:

Unconsciousness for a few minutes

Bleeding or discharge of clear fluid from ear, mouth or nose

Pupils are of unequal size

What to Do During Suspected Injury

If the child is unconscious, do not attempt to move him or her in case there is fear of injured neck or spine.

During seizure, turn the child onto one side to allow vomiting, while making sure that the neck or head are straight.

If the child is conscious, keep him calm and still.

Do not clean the wound to avoid aggravating the bleeding. Just put a clean and sterile bandage over the cut.

Childproof the home by taking out objects or furniture that may constrict their movements.

Have them wear headgear when they go biking or skating,

Use the car’s seatbelt or safety seat while traveling.

After a serious bump in the head, do not allow the child to go back to daily strenuous activities until the doctor deems it fit.

8 thoughts on “Accident Prone Kids and “Goose Egg” on Head”