So Father’s Day didn’t start off on the right foot so to speak. But it ended great! So rather going through the drama in the beginning, lets focus on the good. Had a nice BBQ with friends and some family, was nice to relax and not have to worries about anything for awhile. After dinner we had a small little tabletop event. Kids played Zombie Dice, then we play 7 Wonders, followed by Sushi Go!.

Then we made Ice Cream and watched movies.. Like I said it was nice and relaxing. 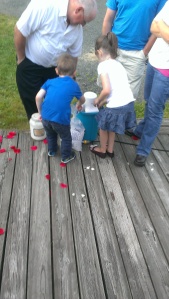