Oh Ticket to Ride…. So much fun and yet (like Monopoly) it’s a cause for quick tempers and small fights haha. Played the classic Ticket to Ride America and found myself losing at that… Yeah….  Then we tried out Ticket to Ride Switzerland again with only two players. Might I add I won Switzerland with 154 points :)!! I like the board lay out, but I can see how it would be easy to screw over people with 3 or more players. Here is a description for the from the publisher’s website: “The Ticket to Ride: Switzerland map and rules first appeared as an exclusive map for the Ticket to Ride computer game. In addition to being specifically designed for a smaller numbers of players the map has several new features. Locomotive cards are used exclusively for tunnels (which work as they do in Ticket to Ride: Europe). Some destination cards have an end point inside Switzerland and other possible ends in adjacent countries (the value of the completed card is based on the farthest possible connection completed). There are also destination cards for connections between adjacent countries.” 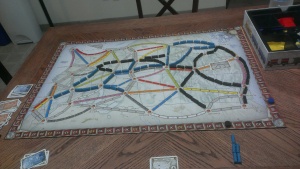 So after Ticket to Ride, we picked up Forbidden Island and that’s when things went south… As you can see in the pictures Fool’s Landing is at the top of the “map”. Not really a good way to start off the game.. Well to make a long story sort, we lost the game  when the water level went up to 4. The tiles were already flooding and so what was the first card I pulled from the top? FOOL’S LANDING……. For those who don’t know much about Forbidden Island the setting is this: You have a team of adventurers(Engineer, Explore,  Messenger, Navigator, Pilot) to capture four treasures from the ruins of this island on a “do-or-die” mission. You work together to capture the lost treasures, as the island is sinking with every turn. You have to collect all the treasures and make an escape back to Fool’s Landing before the island pulls you under the watery abyss. 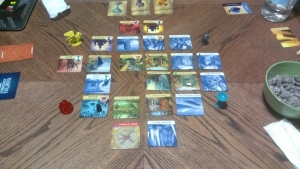 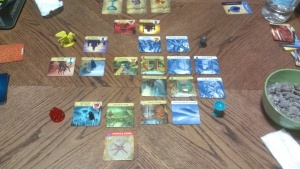 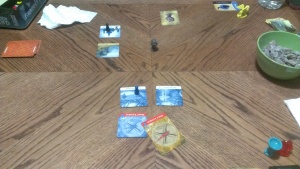 After that disappointing defeat, the next day I thought it would be fun/funny to teach the hobbits how to play Forbidden Island. Being a co-op game it should be easy to do haha.  I must say it was fun watching Lilly put things together and work with us to win the game. She got two treasures by herself and helped keep Fools’s Landing from going under a few times HAHA. I believe she played as the Messenger. 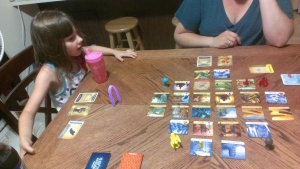