At proximity Oct. 21 1982 at 3:20am I was born. What is odd this whole year seemed to centered around time and history. Specially this month! Because as we all know this is when Doc and Marty were to arrive(Oct. 21. 2015). Another funny thing this months Loot Crate was time theme, which came today by the way! Nice little addition to my birthday.

Another creepy thing happened once I woke up today. Carly was at her desk and puts on Pandora and the first song that comes on was “Never Gonna Give You Up” by Rick Astley. Which is the song they used in the Family Guy mock of Back To The Future. The part were Marty is playing  Johnny B. Goode, here is the videos so you can see what I’m talking about.

Yet another link to you Back To The Future and time hahaha. The day isn’t over yet, so we’ll see what happens as time goes on. A side from all the crazy goings on. I couldn’t help to think about what happen on October 21 through out history or who also shares my birthday. So I figured I’d do some digging! So have broke them up into groups to keep things interesting.

People who have the same birthday:

It’s rather crazy to think about all this history around the word is happening on your Birthday. As a side note, I’ve been writing this post through out the day and adding as I go. I kinda what to keep track of the day and share everything going on. Later me and Carly are going out for a Birthday lunch and hit up the book store and comic shop. SUSHI!!!! I’ll make sure to add picture as well. Because you know… Birthday gifts and all that :).

SO…… It’s the following morning.. Didn’t make it to sushi, but we did get gelato, coffee and BOOKS! Lots of books, not that I already have enough with Star Trek going on hahaha. We headed back home and stopped by a friends house because he had a gift for me and to my surprise everyone was home and had dinner/goodies all ready.  The rest of the night was filled with good times and TableTop(of course).

So this is the birthday loot I got the other night!! I need to read up a little more on the Lord of the Rings deck building game I got. We also played a new game game the other night, a mix of Munchkin & Smash Up. That’s a different beast all together, but super fun. If you have the right deck build that is hahaha.

In the beginning of the day as I stated before, I got my Loot Crate and it was Time theme. Oh my god this was a great box this month. A lot better than last months.. A LOT Better! 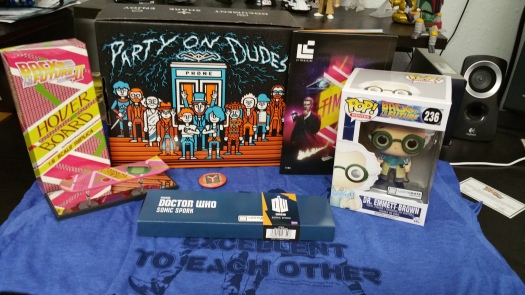 After all was said and done, with everyone tired. We came back home and watch Jurassic World 🙂 Which was rather good to my surprise haha. At any rate, thank you all for the Birthday wishes and following my site for another year!!

This is Gimli. He will be coming home with us on July 7th. This was my wedding/birthday/anniversary gift from @missbee6678 . #puppy #puppylove
Sorry Canada. I guess you don't get to hear the sweet sound of ice, ice baby. #copyright hahahaha
Got my first #covid19 shot today. Just feels like someone punched you on the arm. See how the rest of the day and tomorrow goes. Other than that, not to bad lol. #covidvacccine #covid
Couldn't be happier. I can honestly say that I wouldn't be where I am in life. If it wasn't for her... And to think, all this start by sneaking burritos into the movie theater. Side note: we were going "just as friends". #wedding #life
I feel like I need to write a book with photo now hahaha.