Laurell K.. Hamilton… I did not know she wrote a Star Trek Novel! Always been a big fan of her work. Always enjoyed the Anita Blake: Vampire Hunter series and as well as the her Marvel comic series. So once I found this little gem I had to see what she brought to the Trek universe :). 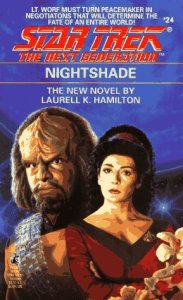 …….. So…. Yeah… Dialogue in the book..My God it was rather terrible. The characters often repeated the same things over and over. Almost like trying to take up space or got lost at some point.. Some of the dialogue seemed totally the opposite of what I’d expect from a character. Like Dr. Crusher for example *Spoilers* telling a race of people that their belief system was “horrific” and “terrible” because they believed in going down with the ship. A lot of it started to annoy me to no end and almost could finish the book..

Side note: I’m beginning to see that the TNG books are falling short on the score cards. But the original Star Trek crew the books and story lines are FAR most entertaining/enjoyable. Rather odd..

Oh sure there are some good points and in the book! The whole things wasn’t a pile of crap. I don’t know what I was thinking there. I know she can write and I love her works as a vampire novelist. But she kinda dropped the ball on this one. Maybe it was a paycheck book :(.

Anywho, if you find yourself a copy of this book. I’d say.. Go ahead and give it a read, but there are some many other and better books out there.. The store line for Nightshade is:

After two hundred years of civil war the planet Oriana is dying. Most of the surface vegetation is gone, the air is nearly unbreathable, and the people themselves are dying. Now, the two warring factions have finally sat down to talk peace, and Captian Picard and the U.S.S. Enterprise are sent ot help them negotiate a settlement.

Picard, Lt. Worf, and Counsellor Troi beam down to Oriana, just as the Starship Enterprise is called away on another urgent mission. Alone on the planet, the U.S.S. Enterprise team learns that there are people that would rather finish the devastating conflict than talk peace. Suddenly, Picard is accused of murder and the delicate negotiations have fallen into the hands of Lt. Worf.

Now, Worf and Troi must unravel the truth and prevent planet-wide disaster, before time runs out for the people of Oriana and the crew of the Starship Enterprise.

One Reply to “Star Trek Book Challenge 11: Nightshade (Star Trek: The Next Generation #24)”