I know in past posts and a handful of podcasts, I have shared the story of my Dad meeting William Shatner, DeForest Kelley and Leonard Nimoy. Then my Dad giving me his pictures and autographs and then to have them 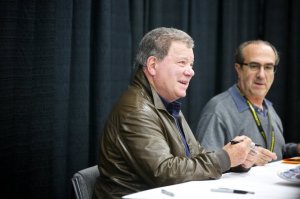 taken by someone. I found the post if you care to read it, I wrote this when Leonard Nimoy passed away (https://nerdylifeofmine.com/2015/03/02/remembering-leonard-nimoy/). So it’s been a mission for me to get replacement autographs for the last couple of years now and with Wizard World Comic Con this year, that became possible! Walking up to the table to buy a ticket to get Shatner’s autograph, not a problem…. Walking up to pick out a picture… Okay don’t panic, doing okay….. Now walking up to Shatner himself… OH MY GOD *screaming on the inside*.

Shatner: Hi! How are you?

Both myself and my ex-wife answered: Fine.

Shanter looks down at the picture: For Carly and Jason… You are Carly (pointing at my wife)?

Shatner: You are Jason (pointing at me)?

Me: Yes (laughing a little bit)

Shatner: Then who are these two (pointing at both my kids)?

Me: That’s Lilly and Jackson.

Shatner: Well hello there!! How are you two?

(Kids look wide eyed and not sure on what to say. Hahha!) Okay…. (Lilly with a smile)

At this point I knew I didn’t have much time talk with Shatner. So I gave him a cliff notes version of my story about him meeting my Grandpa and my Dad while filming TOS – S03E03 – The Paradise Syndrome.

Shatner: Oh yeah! (looking at me while I tell this story.)

Quickly going into detail and the point of the story. On how my Dad then gave them to me and were stolen later on. The only one I had left was Deforest Kelly.

Shatner with him mouth dropping open: My God. I’m sorry to hear that.

Me: Yeah, thank you! So with new autograph from you. This will complete the set. Well almost.. I have half of Leonard.

Shatner: Well that’s good you’ll be able to get the three together then (rather wide eye and smile).

Me: Indeed. Now you have meet 4 generations of this family (Grandpa, Dad, myself and my son).

Shatner: (With a raised eyebrow) Oh….. (realizing how old he was.)

Me: (In the back of my mind. Great! You just called Shatner old… Great…) Thank you so much for letting me tell you about this and letting us meet with you.

Shatner: Not a problem! Enjoy the rest of your day! (as he waves bye at the kids with a smile.)

I know it’s not a interview or a juice story full of details. But it’s an important personal story/mission that I’ve been working on for the last couple of years and I’m happy that it’s coming to a close :). In those 5 minutes I had a lot of weight taken off my shoulders and super happy. I was happy that my kids were able to meet Shatner and I know one day I’ll pass along those autographs to them as my Dad to me. It’s the memories and the stories that come with these chance encounters. It’s not about the money. So thank you so much Mister William Shatner!!

So after trying to cool down a bit, we walked over to Bob Camp’s table. For those who don’t know who Bob Camp is, he is a animator, cartoonist, comic book artist, director, and producer. Camp has been nominated for two Emmys, a CableACE Award, and an Annie Award for his work on The Ren & Stimpy Show. His other works go far back to the what was known as the Saturday morning cartoons (the real Saturday morning cartoons) like:

The New Adventures of Beany and Cecil (1988) DiC (Character designer)

I’ve always been a big fan of his work and style of humor. After walking up there I picked out a drawing he did of the The Royal Canadian Kilted Yaksmen.

Me: Oh yeah! I love Ren and Stimpy, but this one was in my top five.

Camp: Mind if I share a story with you about this?

Me: Sure! Yes please.

Camp: So while coming up with ideas of this episode. We had a lot of guys in Canada working on this. We kinda gave them freedom to do whatever they want and then they will send it back to us. Now there is a scene where they are all cheering in the cartoon and throwing their hats into the air. Well one of them put in some intestines and what would be a cigar looking bit come flying out of it. Now back then things like that were getting cut left and right. But once we saw this we were all laughing. Later I asked the producer if she liked it? She said she thought it was funny and gave it a green light.

Camp: Yeah. Then come to realize she wasn’t even looking at the screen half the time.. That’s how we got away with so much stuff like that.

Me: Oh? What happened?

Camp: Well on the 30 anniversary of the show, we released a set with all the cuts plus some bonus clips. But one of the reps was shocked that was given a okay. The producer later told me that she saw it and gave the okay anyways. I still doubt that this was true, I just think she was just trying to cover her butt hahaha.

Me: Hahaha wow. Yeah I remember a lot of that as a kid and was amazed on how you guys were pushing the limits on everything. My Dad got me hooked on this show and also grow up on Tex Avery & Chuck Jones. I started mimicking your art style to find my own, because I loved it so much.

Camp: How do you think me and guys like John K. got started? Haha we copied the crap out of those guys as well. I remember starting out in some little film festival in Ojai, CA.-

Me: That’s my home town! I was born there!

Me: Do you know Eric Pigors? He worked with Disney and created ToxicToons.

Camp: Yes! I know Eric! How do you know him?

Me: I did a art show a few years back and he was there and then we met at a Horror Con. From there we just hit it off and met his wife and got a tour of his house haha.

Me: Oh yeah! That and art everywhere.

Camp: You know he almost died not that long ago?

Me: Yeah I remember reading the post his wife made on Facebook. I haven’t heard anything else after that tho.

Camp: Oh yeah. Scary stuff. He had a major heart attack at home. I know he is doing better now. Super nice guy!

Me: Oh wow! Yeah he is. Would hate to lose him.

Camp: Off topic.. Have we sang the The Royal Canadian Kilted Yaksmen anthem at all today?

Camp’s Wife: No we have not haha.

Camp: Do you remember the words to the song?

Me: Most of them I do haha.

Both me and Bob Camp stood there in the middle of Wizard World comic con, started singing The Royal Canadian Kilted Yaksmen anthem… Yeah that so happened! Never in a million year did I think something like that would ever happen hahaha!! If you don’t remember the song here is it:

This was one of the best things that took place at this years comic con haha. It still makes me laugh. Thank you so much Bab Camp for you time and stories!

Now I do have a number of other stories and events to share with you all. As well as new podcast interviews :). So please come by again and check it out!