“Bilbo Baggins was a hobbit who wanted to be left alone in quiet comfort. But the wizard Gandalf came along with a band of homeless Dwarves. Soon Bilbo was drawn into their quest, facing evil orcs, savage wolves, giant spiders, and worse unknown dangers. Finally, it was Bilbo–alone and unaided–who had to confront the great dragon Smaug, the terror of an entire countryside.”

“Where did you go to, if I may ask?’ said Thorin to Gandalf as they rode along.
To look ahead,’ said he.
And what brought you back in the nick of time?’
Looking behind,’ said he.”
― J.R.R. Tolkien, The Hobbit, or There and Back Again

This is not the first time I’ve read the The Hobbit, nor will it be the last. I can’t tell you how many times I have read it over the years. Between Middle School, High School and even as a bedtime story for my kids. This goes for all the stories of the Middle Earth. Unlike my Star Trek Challenge, where they were completely new adventures to me. Where I have love for some and hatred for others haha. The Middle Earth as a whole has been a love of mine for sometime now. I’ve always wanted to do a reading train on the novels for awhile and now that I have free time on my hands. I think I will.

Now I will odiously be going over the books of Middle Earth in this challenge. But to add a twist at the end I wanted to compare them to the movies. I know there is a number of people who love the movies and others who hate them, there really is no middle ground with them. I for one love them, over all I’m just happy I get to live in a time where they were made and done well . Not slapped together like the D&D movie…….

Now the The Hobbit is a much lighter tale then the LOTR trilogy. A lot of I believe is do to how Hobbits live and their views on life. It’s funny because I’m having a hard time writing a review for the book and explain my joy in this adventure. At it’s core it is an adventure novel, dare I say one of the most charming adventure stories ever told? Oh sure there are a few parts where it gets long winded, but it’s not as bad as George R.R. Martin.

Nowadays People have the good fortune of seeing Peter Jackson’s films, but I and many folks of an earlier generation recall the 1977 animated film with voice talent from John Huston, Orson Bean and Richard Boone. This cartoon was my first introduction to Tolkien’s work and would later lead me to read the Hobbit and Lord of the Rings. Thorin, the lead Dwarf and company leave from the Green Dragon, accompanied by the wizard Gandalf and employed Mr. Baggins as their lucky number 14 and as a burglar. And Bilbo’s unexpected adventure had begun.

Riddles in the Dark. After some fairly pedestrian undertakings Tolkien has Bilbo getting lost in a deep cave and introduces us to one of his strangely likeable villains, Gollum. Later readers would learn the deeper truths of his history, but Tolkien’s guests in this chapter see him as a eccentrically troubled scoundrel.

Songs. A reader in the twenty-first century, and especially one who has enjoyed the Jackson films, may discover that Tolkien’s original story was not as martial as the films. Jackson produced his Hobbit films to be less war-like than his LOTR films, but Tolkien’s prose contained a fair amount of poetry and song, casting his story. If you happen to find yourself a copy of this book, read it. It’s a charming novel that can stand by itself.

Now!! Lets get into the differences between the movies and the book:

Wow.. Okay after going over my notes I have realized this post will be come a small novel in itself. While there are a number of changes between the 1 book and the 3 movies hahaha. I feel that some had to be made.. A lot of people complained that there was to many changes or they just added random things in. When you read though the complains, they seem to be rather small. The Hobbit trilogy’s storyline draws on material from the appendices at the end of the Return of the King novel, especially Dwarven history and the White Council’s dealings with the Necromancer, who proves to be Sauron. As well as some elements of the The Silmarillion. While yes, there are a few parts in the movies where I found myself tilling my head going, “what?”. But I had a smile across my face and enjoyed the movies as a whole. 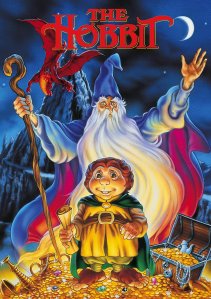 Now the 1977 animated production in most respects similar to the book. The criticism focused on adaptation issues, with unfamiliar style of artwork used by the Japanese-American co-production team. Tolkien fans questioned the appropriateness of repackaging the material as a family film for a very young audience. Douglas A. Anderson, a Tolkien scholar, called the adaptation “execrable” in his own introduction to the Annotated Hobbit, although he did not elaborate; and a few critics said it was confusing for those not already familiar with the plot. On the other hand, critics praised the adaptation as “excellent”, saying the work received “big points” for being “faithful to Tolkien’s story” and that the “vocal cast can’t be improved upon.” I myself loved this as a kid, the LOTR animated film left me going WTF? The Return of the King was good, from what I can remember.

One Reply to “Middle Earth Challenge: The Hobbit”