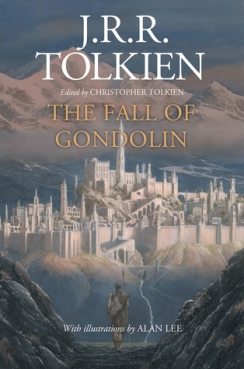 In the Tale of The Fall of Gondolin are two of the greatest powers in the world. There is Morgoth of the uttermost evil, unseen in this story but ruling over a vast military power from his fortress of Angband. Deeply opposed to Morgoth is Ulmo, second in might only to Manwë, chief of the Valar: he is called the Lord of Waters, of all seas, lakes, and rivers under the sky. But he works in secret in Middle-earth to support the Noldor, the kindred of the Elves among whom were numbered Húrin and Túrin Turambar.

Central to this enmity of the gods is the city of Gondolin, beautiful but undiscoverable. It was built and peopled by Noldorin Elves who, when they dwelt in Valinor, the land of the gods, rebelled against their rule and fled to Middle-earth. Turgon King of Gondolin is hated and feared above all his enemies by Morgoth, who seeks in vain to discover the marvellously hidden city, while the gods in Valinor in heated debate largely refuse to intervene in support of Ulmo’s desires and designs.

Into this world comes Tuor, cousin of Túrin, the instrument of Ulmo’s designs. Guided unseen by him Tuor sets out from the land of his birth on the fearful journey to Gondolin, and in one of the most arresting moments in the history of Middle-earth the sea-god himself appears to him, rising out of the ocean in the midst of a storm. In Gondolin he becomes great; he is wedded to Idril, Turgon’s daughter, and their son is Eärendel, whose birth and profound importance in days to come is foreseen by Ulmo.

At last comes the terrible ending. Morgoth learns through an act of supreme treachery all that he needs to mount a devastating attack on the city, with Balrogs and dragons and numberless Orcs. After a minutely observed account of the fall of Gondolin, the tale ends with the escape of Túrin and Idril, with the child Eärendel, looking back from a cleft in the mountains as they flee southward, at the blazing wreckage of their city. They were journeying into a new story, the Tale of Eärendel, which Tolkien never wrote, but which is sketched out in this book from other sources.

Following his presentation of Beren and Lúthien Christopher Tolkien has used the same ‘history in sequence’ mode in the writing of this edition of The Fall of Gondolin. In the words of J.R.R. Tolkien, it was ‘the first real story of this imaginary world’ and, together with Beren and Lúthien and The Children of Húrin, he regarded it as one of the three ‘Great Tales’ of the Elder Days.

Here it is! Third novel in the first age of Middle Earth.. Now I have written on a number of events that take place during this time and the links are as follows:

What Are The Origins Of The TROLLS? | History of Middle-Earth | Lore

The Fall of Gondolin was set into motion a few decades after the Nírnaeth Arnoediad (which is the fifth battle against morgoth in the first age of Middle Earth). Now keep in mind that the War of the Great Jewels (The Silmaril) went on for decades and decades. There were six great battles that took place:

First Battle – Fought mainly by Sindar(also known as the Grey Elves/Elves of telerin descent) against the Dark Lord Morgoth.

Dagor-nuin-Giliath – This wold the second battle, also known as the Battle Under the Stars. It was set in Beleriand(a region in the North West of Middle Earth) and first to be fought by exiled Ñoldor(the second clan of Elves, greatest of the Elves in lore and smithcraft.)

Dagor Aglareb – The third battle and the second battle in Beleriand. After the battle of Dagor-nuin-Giliath, there was a the beings of a civil war. But Morgoth began his attack and united the Elves and Men. This is also the first COMPLETE victory over Morgoth. This also made a period of the peace call Siege of Angband.

Dagor Bragollach – Also known as Battle of the Sudden Flame became the fourth greatest battle of the War of the Jewels. This is also the end of the Siege of Angband and the Dark Lord Morgoth took control over the war. This is also where Morgoth created the first Dragon. Morgoth’s army was in full swing with Orcs, Trolls, Balrogs and Glaurung(first dragon).

Nírnaeth Arnoediad – Or Battle of the Unnumbered Tears  is the fifth battle I was talking about in the beginning of this. Like I said before, the actions in the battle set forth the Fall of Gondolin and also the tragic history of Húrin. This battle saw a number of casualties on both sides. In the end Morgoth got the upper hand in the battle field of Anfauglith. The Failure of the Elves and Men of the Battle of Nírnaeth Arnoediad. Morgoth had destoryed all the people of Hithlum and his Orcs sacked Beleriand and forced the Sons of Fëanor away from Himring. This is also when Morgoth laid the curse upon Húrin and his kin, as well bound Húrin to a chair to watch the curse unfold before him. This is where the novel The Children of Húrin comes into play.

War of Wrath – Also called the Great Battle. Elves, Men, Dwarves and Valar all fought against Morgoth. This is now the end of the first age of Middle Earth and it is considered to be the largest battle of Middle Earth. The clashes between the forces of Valar & Morgoth was so violent, it broke apart the northwestern of Middle Earth and caused Beleriand to sink into the ocean.

But I feel that War of Wrath is set for another time. This is about the  Fall of Gondolin. While the novel itself does cover the War of Wrath, it was a rather short or at least it fell short. The Tale of Earendil is the highlight of the book. Sadly there are times within the novel it where is kinda lags. Where Christopher Tolkien goes into how his father wrote and the process he went through. While interesting to read, it kinda takes away from the book a little bit. But I am happy over all that these novels are finished and out there for everyone. It just make the Middle Earth bigger and more room for other stories to be told. But before reading these three novels, I say you have to read The Silmarillion first as it give you more insight into the history.

2 Replies to “Middle Earth Challenge: The Fall of Gondolin”