Mister William Castle has always been one of my favorite Directors/story tellers. He has acted as a main source inspiration for a lot of my art work and life style. Well him, Vincent Price and Ed Wood. I’ve always loved that era of movies/stories and always felt an odd contention with them. I miss gimmicks theme they use to do back in the day. Castle was one of the few that would actually get the people involved in his movies. With the use of “gimmicks” or tricks to scare people over the course of the film.

Castle at age 13, went to see Dracula with Bela Lugosi and was entranced. He watched it over and over, eventually managing to meet Lugosi himself. He wrote in his autobiography Step Right Up! I’m Gonna Scare the Pants off America:

“I knew then what I wanted to do with my life—I wanted to scare the pants off audiences.”

Lugosi recommended him for assistant stage manager for the road company tour of the play. The 15-year-old dropped out of high school to take the job. He spent his teenage years working on Broadway in jobs from set building to acting. He obtained Orson Welles’ telephone number and persuaded Welles to lease him the Stony Creek Theatre in Connecticut. 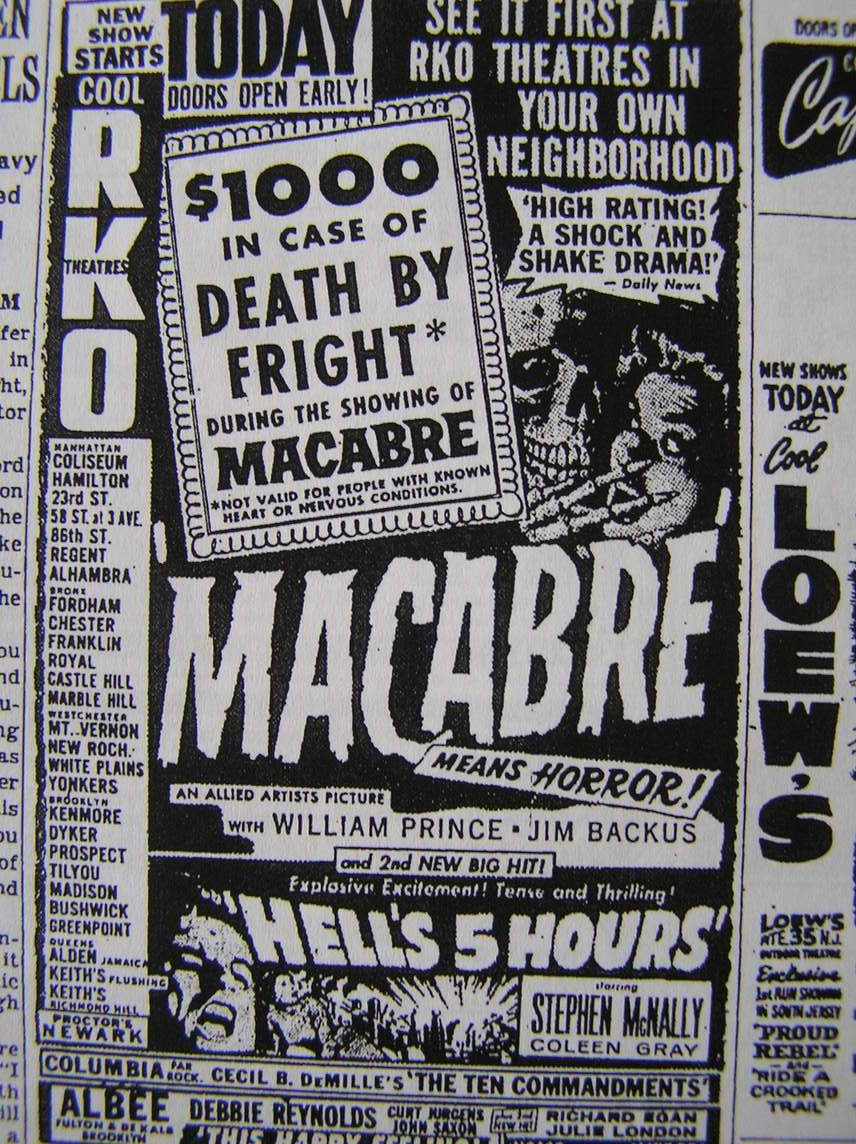 He left for Hollywood at 23 to work for Columbia Pictures. Beginning as a dialogue director for Music in My Heart (1940). Unsatisfied, Castle began to make films independently. The inspiration of the 1955 French psychological thriller Les Diaboliques set William Castle on the course for the genre he would become famous for. He financed his first movie, Macabre (1958), by mortgaging his house. He would come up with the idea to give customers a $1,000 life insurance policy from Lloyd’s of London. Just in case they should die of fright during the film. He would place nurses in the lobbies and have hearses parked outside the theaters. Macabre was a hit.

House on Haunted Hill (1959), filmed in “Emergo”. A skeleton with red lighted eye sockets attached to wire floated over the audience in the final moments of some showings of the film to parallel the action on screen when a skeleton rises from a vat of acid and pursues the villainous wife of Vincent Price’s character. Once word spread about the skeleton, kids enjoyed trying to knock it down with candy boxes, soda cups, or any other objects at hand. 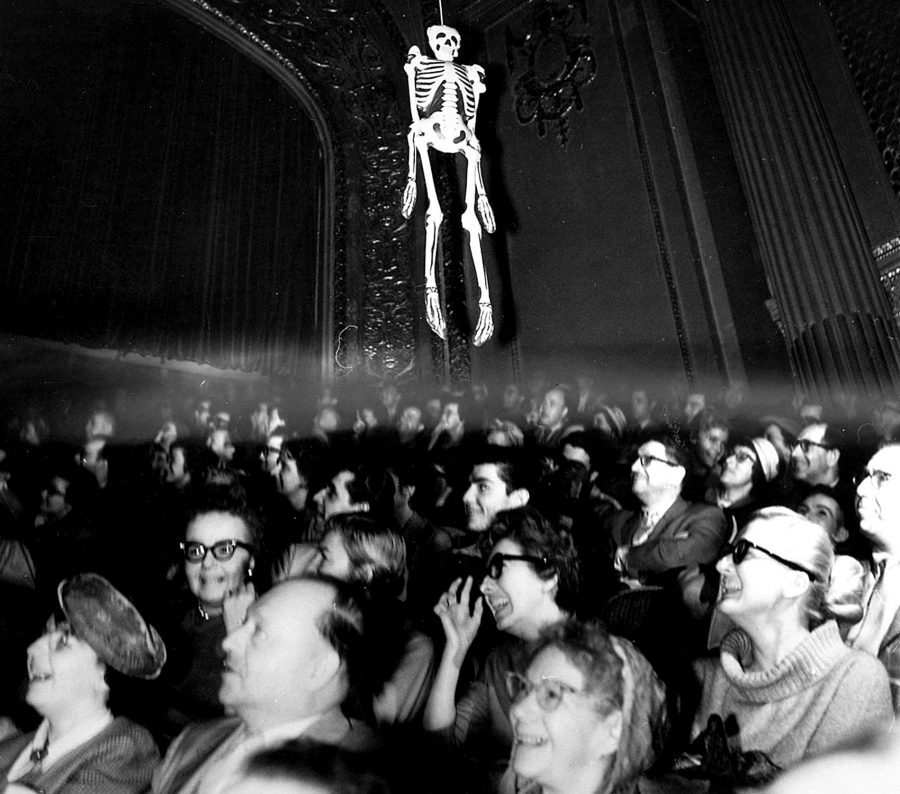 The Tingler (1959), filmed in “Percepto”. The title character is a creature that attaches itself to the human spinal cord. It is activated by fright and can only be destroyed by screaming. Castle purchased military surplus airplane wing de-icers (consisting of vibrating motors) and had a crew travel from theatre to theatre, attaching them to the underside of some of the seats (in that era, a movie did not necessarily open on the same night nationwide). In the finale, one of the creatures supposedly gets loose in the movie theater itself. The buzzers were activated as the film’s star, Vincent Price, warned the audience to “scream—scream for your lives!” Some sources incorrectly state the seats were wired to give electrical jolts. Filmmaker and Castle fan John Waters recounted in Spine Tingler! how, as a youngster, he would search for a seat that had been wired in order to enjoy the full effect.

13 Ghosts (1960), filmed in “Illusion-O.” Each patron received a handheld ghost viewer/remover. During certain segments of the film, a person could see the ghosts by looking through the red cellophane or hide them by looking through the blue. Without the viewer, the ghosts were somewhat visible. The DVD release included red/blue glasses (not 3D glasses, as sometimes reported) to replicate the effect.

Homicidal (1961), There was a “fright break” with a timer overlaid on the film’s climax, as the heroine approaches a house harboring a sadistic killer. The audience had 45 seconds to leave and get a full refund if they were too frightened to see the remainder of the film. In an early showing, wily patrons simply sat through the movie a second time and left at the break to get their money back; to prevent this in future, Castle had different color tickets printed for each showing. About 1% of patrons still demanded refunds. John Waters described Castle’s response:

William Castle simply went nuts. He came up with “Coward’s Corner,” a yellow cardboard booth, manned by a bewildered theater employee in the lobby. When the Fright Break was announced, and you found that you couldn’t take it anymore, you had to leave your seat and, in front of the entire audience, follow yellow footsteps up the aisle, bathed in a yellow light. Before you reached Coward’s Corner, you crossed yellow lines with the stenciled message: “Cowards Keep Walking.” You passed a nurse (in a yellow uniform?…I wonder), who would offer a blood-pressure test. All the while a recording was blaring, “Watch the chicken! Watch him shiver in Coward’s Corner!” As the audience howled, you had to go through one final indignity – at Coward’s Corner you were forced to sign a yellow card stating, “I am a bona fide coward.”

Castle would later try and brake into the “A Movie” list with Rosemary’s Baby and even mortgaged his home again to get the rights for the movie before the novel was published. Castle would later try and make a deal with Paramount to direct the movie. But they went with Roman Polanski and made Castle a producer for the film. Sadly he wasn’t able to continue the success, having suffered kidney failure. Once he recovered, Castle went back to making “B movies” and his last acting gig was as a Director in the film The Day of the Locust in 1975.

Alfred Hitchcock decided to make Psycho after noting the financial success of 1950s B-movies by Castle and Roger Corman.

Among his admirers is filmmaker John Waters, who wrote, “William Castle was my idol. His films made me want to make films… William Castle was God.” Waters portrayed Castle in the episode “Hagsploitation” in the first season of the FX television anthology series Feud, depicting the notorious rivalry between Bette Davis and Joan Crawford through the production and aftermath of What Ever Happened to Baby Jane? Waters (playing Castle) appears onstage at an Oklahoma theater in 1964, exuberantly introducing a screening of Strait-Jacket while Jessica Lange (as Crawford) proceeds down the aisle, wincing and wielding an axe past hooting teenagers before pursuing Castle behind a backlit scrim to “decapitate” him in silhouette.

Two of his films were remade by his daughter Terry Ann Castle, who co-produced House on Haunted Hill in 1999 and Thirteen Ghosts in 2001 (the latter retitled Thir13en Ghosts).

A documentary focusing on Castle’s life, Spine Tingler! The William Castle Story, directed by Jeffrey Schwarz, premiered at AFI Fest 2007 in Los Angeles on November 8, 2007. It won the Audience Award for Best Documentary.

The protagonist in the 1993 film Matinee, played by John Goodman, is based on Castle.

Sadly on May 31, 1977 William Castle dead of a heart attack in Los Angeles.

William Castle with his wife(Ellen Falck) and two kids.

Castle, William (2011). “From the Grave: The Prayer”. William Castle Productions.