The WordPress.com stats helper monkeys prepared a 2014 annual report for this blog.

The concert hall at the Sydney Opera House holds 2,700 people. This blog was viewed about 13,000 times in 2014. If it were a concert at Sydney Opera House, it would take about 5 sold-out performances for that many people to see it.

I forgot how funny this movie was.

Oh how I long for the days of nap times and juice boxes.. Well the title might be misleading, I’m not really going to pull out the soap box and go off on a tangent. Just a lot of things happen this week that made miss the good old days of preschool. Everything from bills, car problems, trying to get everything moved/settled in from the girlfriend moving in with me. Then there is the ups and downs of the child  custody with the ex,  there were some paper work that was file I personally didn’t find “cool”. But oddly enough I wasn’t mad and we sat down and remade the custody/parenting times so she will be able to rebuild her relationship with the kids. For those who aren’t up to date the “drama” and goings on here is a link to an older post I made about what has happened. But with that being said, not all things were bad! Lilly is doing well in school beside going for a full day of school (8:30am-3:25pm) I’m sure you’ve seen the 1st day of school pictures. Jax on the other hand had to get 3 shots and some blood drawn for a lead test (poor little guy), so we just had some guy time watched Batman, playing some games, and had ice cream haha.

On Saturday Spent the day with the Hobbits and took them to Wicked Comics here in Albany Oregon. One of the main things I was looking for was euro size card sleeves to finish off my Alhambra board game. Sadly they didn’t have what I needed, but they were really nice and told about some other place that might have them. SO I found myself heading to Matt’s Cavalcade Comics in Corvallis and there he only had 2 50 packs of the euro size. I figured that will be enough for the game.. NOPE! I was only 10 off, well 26 if you count the expansion for the game. So this last Sunday I had to drive up to Salem to Borderlands Games and that’s where I found everything I needed and then some. Oh a small side story that happened in Matt’s Cavalcade Comics. So once I walked into the shop everyone looked up and saw I had kids, I think everyone made the “Oh great. Children.” face. But then Jax found the Doctor Who sleeves and went off on everything haha! From there I hear some people laughing and saying “how cute.”, there was this guy standing behind us looking at comic with his girlfriend. Then asked if Jax can name off the characters from the show and the Doctors.. To my amazement Jax did just that and then some, the guy’s girlfriend then leans over and says,”Honey. He knows more then you do and he is only 4.” Awww nerd fail.So with that I had to get him something and this is what he got. The best Doctor Who poster ever haha. 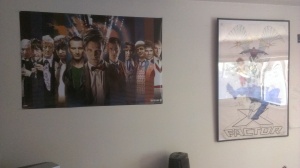 Also on Saturday I made a print of DeForrest Kelly (Bones from Star Trek), the reason behind the print was do to the autograph I got from my Dad. When my Dad was a kids he met Kelly, Shatner, Nimoy and some “Shatner girls” I had them filed away so nothing with happen to them, sadly when it became to frame them up and I couldn’t find them. Called up everyone who has been in my house to see if anyone seen them or know of anyone random has some new autographs. No Luck.. So I started cleaning out the garage and Found DeForrest Kelly! This was the most important one to me, aside from being my favorite Doctor and the fact the actor is also not alive anymore. This was something my Dad gave me. So I printed off a photo and added the autograph to the picture..

I’m still hunting for the Shatner, Nimoy and hope I can find them! I know Shatner & Nimoy are going to be at the Portland Comic Con coming up next year and thought it would be cool bring the picture of my Dad when he was a kid getting autographs from them. Then getting new autographs from them.

Just finish make a Pip-Boy for my son for his Halloween costume. #fallout #pipboy #diy #cosplay
So with #halloween coming up. Jackson wanted to base his costume on the #fallout video game. I have to admit I love the idea and now we are both making our costumes for Fallout. These pictures are of Jackson Pip-Boy. I'm currently working on mine and had some ideas to place some LEDS and Bluetooth speakers in them both. Afterwards I'll make some weapons for us both and leather armor. #familytime #cosplay
Jackson and Lilly at the wedding. I'm still amazed on how grown up they are. #wedding #highland
Another wedding snap shot #wedding
Slowly rebuilding my comic collection. GEN 13 by @jscottcampbellart & @jimlee @imagecomics #comic #comicbooks
New signed comics by @jscottcampbellart #comic #comicbooks
We going on an adventure! Rather awesome wedding. Thank you @rachael_houchin #LOTR #Hobbit #tolkien
Kids are back in school! Something I'm definitely going to have to get use to. #school