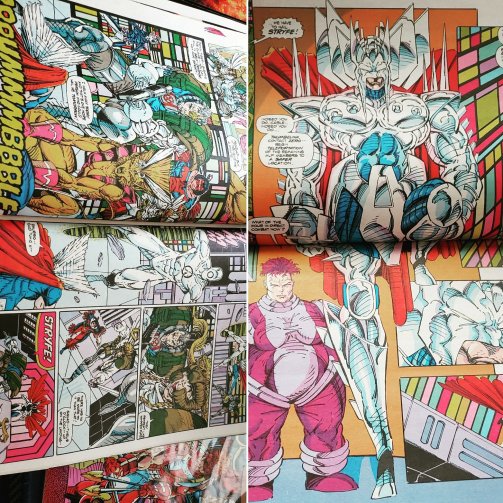 So last month I talked about Image Comics and some memories that I had. That can be found here (LINK). Because of that, it caused me to start collecting again and the other day I found a number of comics in this antique mall here in town. I wasn’t going to write about it. But I did make a 4 part post on Twitter about it and for some reason I got on a small soap box.

Part 1: Earlier today. I found a small little treasure chest of #XFORCE comics. @robertliefeld After talking about doing the a podcast/blog on @ImageComics and sharing stories from when we were kids. It caused a spark/drive to find these lost comics. Found Two different versions pic.twitter.com/IR3hLSd5m5

Part 2: of issue 1 of X Force & issues 3-7. Still missing 2 & 8-10. Found 1st issue of Youngblood too! Also found a number X Men comics when Jim Lee was drawing them. I missed collecting comics. Definitely got the bug again, so to speak. To hear the podcast and read some of the

Part 3: stories from when we were kids. Check out https://t.co/OJwUKYUbCR

Rob, Jim & Todd all had a big impact on my life and where I wanted to go with my artwork. As a kid I always had a hard time reading and writing. Following these icons from Marvel to Image comics helped me overcome most, if not all of my Dyslexia. I thank you!

I really didn’t think much of it. Then it hit on much these comic help me change and over come learning issues I had a child. I normally don’t talk about these on here, mostly because it’s never really come up before hahaha. But now reading through these comics, it is clear I had forgotten on how great they were. I think I wrote about this before…

Yes, yes I did.. But that’s okay… Me and my Dad would have our weekly trip to the comic store and pick up whatever we can get. I remember trying to copy a lot of the art styles

that were there by Liefeld, McFarland, Lee. To me the early 90’s were a golden time for comics and art over all. I loved the stories and reading over and over again. Helped me with my Dyslexia (also reading Michael Crichton).

After going through all these comics I just got, I want to go back and dig around some more. I know there is a local comic shop I want to hit as well. Another cool thing was, when I posted these tweets. I got a retweet from Rob Liefeld. It may seem like “small beans” to most, but to me it was a cool little nod/”I saw that”.

On top of that my girlfriend was helping me dig through some of the comics and she found two comics of Buckaroo Banzai! It was a limited two part comic series released by Marvel. Buckaroo Banzai being one of my favorite movies I had to get them. I’m sure I’ll write again soon about some of the finds I have. Also me and my fellow co-hosts on our podcast were talking about doing another Image Comic eps. Seeings how I missed that one.. Ugh.. So I’ll post more updates about that as they come in.

In words of Sophia Petrillo (Golden Girls if you don’t know)… Picture it Ojai, California, 1993. I was 10 years old at the time and just starting to really get into comics. I was really into DC and had a nice collection going with the help from my Father. There was a comic book store in town, sadly for the life of me I can not remember the name of it. I just remember it was a hole in the wall , next to a army surplus store in a back ally behind a restate office. I remember going there for a couple of years as it was my first comic shop I have ever been to. I think it was open for about 5 years before he had to move his shop. Do to drama (A story for another time) and he tried to run the business out of his garage. That didn’t work to good and the doors was shut.

But that not the story I want to tell here. I was starting to get into Marvel when one of my friends show me these trading cards he had. These were the Marvel Universe Series 4 Base set. If you collect all of them you were able to put them together to make one full picture. Of course I remember doing a bunch of yard work to earn enough money to go buy a box set. Back then it was $60.00 and I managed to make a little over 80 dollars. From there I got my box set and then found a number of comics  like X-Force, Jim Lee’s X-Men, Spider-Man, Robocop vs Terminator. There was Batman vs The Predator series I picked up as well, but only got two copies in and stop. It didn’t hold my interest as well.

But I remember that summer there was this buzz going around about a new comic company called Image Comics. Being that young at the time, I didn’t really understand what the big deal was. One of my neighbor’s kids use to come over a lot and one day he asked if I wanted to see his comic collection. Not really thinking much about it I went on. Because we were trading and talking shop about comics…

While we were walking to his house he was talking about Image Comics and a artist name Todd McFarland. He was completely enamored with Todd’s work and wouldn’t stop talking about it. I knew of Todd because of his work on Spirder-Man and Venom. So I could only imagine what this Spawn would look like. I was wrong… What I had pictured in my head was completely wrong and was not ready for the world of Spawn. 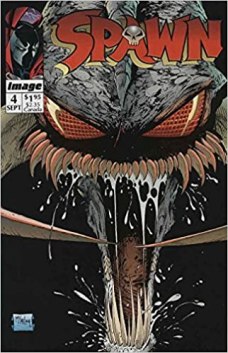 We get to his room and in his closet he had a number of shelves label with what comic go where and by artist. It was amazing…. He pulled out the an issues of Spawn to see if I would even like it. All black with big bold red letters spelling “SPAWN”. Behind that was this monster or demon looking thing with teeth all over the place and these red bug like eyes. Two big horns or tusks if you will and all the slime and that was it.. As I opened the comic I was blown away by it. I had never seem anything like this before. Nor read anything like this before. I knew my Mom would NOT let me have these at the house or over all. But I knew my Dad was more open about things like that hahaha. I must have read it 5 times while I was at my neighbor’s house. From there he introduced me to Young Blood, Savage Dragon, WildC.A.T.s…. I was in nerdy heaven.. Before I left, my neighbor gave me the Spawn issue number #4 with the Violator on the cover. Wanted nothing in return, he had doubles anyways.

Thanks to him He started a obsession that will continue well into my adult years. My Father was hooked by Spawn, he really fell in love with Jim Lee’s art style. So WildC.A.T.s. and Gen13 (Scott Campbell) was his favorites by far. Through out high school I would copy McFarland art work over and over. Trying to have a better understanding on how to draw. While my Father trained me with the classics of Tex Avery and Chuck Jones style of art. McFarland really kicked open the door to whole new world.

As a kid this was an exciting time and realizing now what was going on shocked me. On Amazon there is a Documentary called “The Image Revolution”.

In 1992, Marvel Comics was the number-one publisher of comic books in the world, largely due to its dynamic artwork. But as a response to what was believed to be years of mistreatment toward creative talent by the industry’s leading publishers, a small – but influential – group of artists left Marvel Comics at the height of its popularity to form their own company, Image Comics.

In one of my podcast we were talking about some new things we have watched and would share them. Chris Lockhart told us about this Documentary. He was not wrong at all! This brought back some many memories watching this movie. It was interesting to see what was really going on behind the scenes  and not just rumors around the comic shop. I’m happy to be around when that happened, because that change the way comic were forever really.

One of the main reason why I’m writing about this now, was because I was to be on a podcast talking about Image Comics. Sadly I was not able to make that show. I really want to do that one too.. But in the end I think is the best way to make it up. Here is the link to the podcast is you would like to give it a play:

On this episode of ‘The Pop Culture Pub Podcast’ they are discussing Image Comics. Host Chris Lockhart is joined on the episode with Co-Host Kevin Decent.

And we have our ‘Brain Candy’ and ‘Enders’ segments discussing current pop culture news.