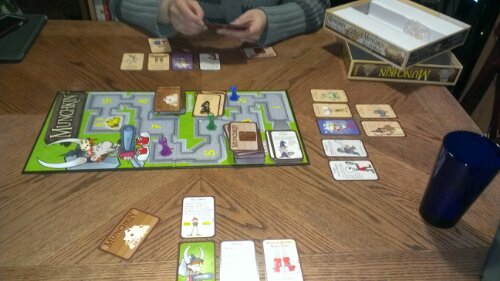 So I found another game I really like. But can not ever win 🙂 Munchkin.. Here cones the Wil Whedon curse again

Some early production stills from TableTop! Are you watching along for TableTop Binge Day?

So this last Saturday we had TableTop night again!  Play a new little game called Timeline: Inventions. Not a bad little game, it’s a filler for in between games. The idea behind it is you get these card face down with a picture of an invention on it. On the other side is the year in which it was made. Example: What year was the Rubber Band made? Answer: 1845. (Fun Fact: Currently, some 342 million red bands are used every year.) Once you answer the question you place the card in the Timeline before you in order. Description

“Timeline: Inventions is a card game played using 109 cards. Each card depicts an invention on both sides, with the year in which that invention was created on only one side. Players take turns placing a card from their hand in a row on the table. After placing the card, the player reveals the date on it. If the card was placed correctly with the date in chronological order with all other cards on the table, the card stays in place; otherwise the card is removed from play and the player takes another card from the deck.

The first player to get rid of all his cards by placing them correctly wins. If multiple players go out in the same round, then everyone else is eliminated from play and each of those players are dealt one more card for another round of play. If only one player has no cards after a bonus round, he wins; otherwise play continues until a single player goes out.”

Next is the ever classic Settlers of Catan! I love this game, how can you not like this game. I HAVE WOOD FOR SHEEP!! Yes that the only time in someone’s life where it’s okay to say that HAHA. I  almost had the game, I have the longest road and largest army. Only 2 points away from winning, I had it all taken away. Just didn’t have the Stone or Brink to build…. My gaming buddy (we’ll call him Care Bear for the time being.) Also had a horrible defeat, as you can see in the pictures below HAHA! In Settlers of Catan, players try to be the dominant force on the island of Catan by building settlements, cities, and roads. Each turn dice are rolled to determine what resources the island produces. Players collect these resources to build up their civilizations to get to 10 victory points and win the game. 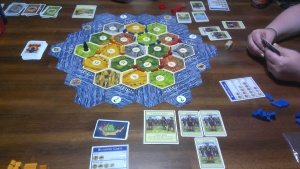 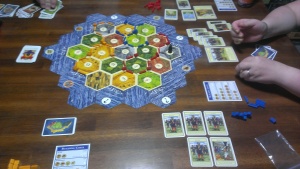 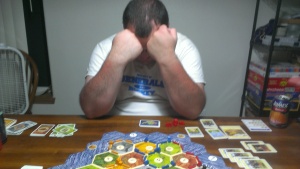 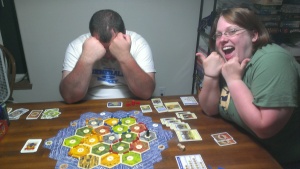 To end the night we played Star Wars: X-Wing Miniatures. I had never play this before and I must say it was AWESOME! We just dove right into it, I played the light side and “Care Bear” was the dark side. I found myself losing all of my shields and my Y-Wing. “Care Bear” lost all of his ships, well one ran away off the board haha (oops).  Game description from the publisher:  “Tactical ship-to-ship combat game in which players take control of powerful Rebel X-wings and nimble Imperial TIE fighters, facing them against each other in fast-paced space combat. Featuring stunningly detailed and painted miniatures, the X-Wing Miniatures Game recreates exciting Star Wars space combat throughout its several included scenarios. Select your crew, plan your maneuvers, and  complete your mission!

Whatever your chosen vessel, the rules of X-Wing facilitate fast and visceral gameplay that puts you in the middle of Star Wars fiercest firefights. Each ship type has its own unique piloting dial, which is used to secretly select a speed and maneuver each turn. After planning maneuvers, each ship’s dial is revealed and executed (starting with the lowest skilled pilot). So whether you rush headlong toward your enemy showering his forward deflectors in laser fire, or dance away from him as you attempt to acquire a targeting lock, you’ll be in total control throughout all the tense dogfighting action.

Star Wars: X-Wing features (three) unique missions, and each has its own set of victory conditions and special rules; with such a broad selection of missions, only clever and versatile pilots employing a range of tactics will emerge victorious. What’s more, no mission will ever play the same way twice, thanks to a range of customization options, varied maneuvers, and possible combat outcomes. Damage, for example, is determined through dice and applied in the form of a shuffled Damage Deck. For some hits your fighter sustains, you’ll draw a card that assigns a special handicap. Was your targeting computer damaged, affecting your ability to acquire a lock on the enemy? Perhaps an ill-timed weapon malfunction will limit your offensive capabilities. Or worse yet, your pilot could be injured, compromising his ability to focus on the life-and-death struggle in which he is engaged.” 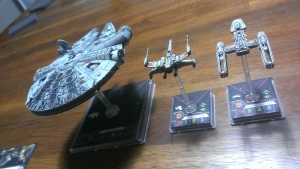 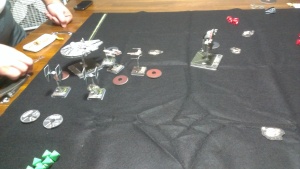 So the other night we (me & my wonderful nerdy girlfriend) had a small TableTop night. We played five different rounds of games and might I add I won 3 of them! Started off with Ticket to Ride: India witch a super fun map. All tho we didn’t play with the rule of occupying only one track when there are doubles. Never played India before so we wanted to get a feel for it.

So after my lovely win (I’m green by the way) we started up Ticket to Ride: US. Seeing how my girlfriend was a little mad that she lost and thinking I never win at the US map. What could go wrong? Me winning the US map……  Played again, she won this time. So at this point we’re tied and we played one more time on the US map and I won…… Yeah OOPS. So I pulled Alhambra out because I NEVER win at this game.. NEVER. As much as I love it, I never win.  To make a long story sort, she won! Made her feel better at least haha.. 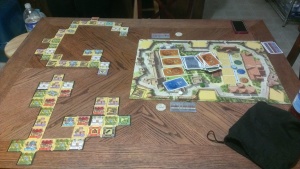 The following day my little Hobbits wanted to play a boardgame. Well they wanted to play Ticket to Ride, but I think it might be a little hard for them at this point in time. SO Alhambra it is!! I must say I’m rather shocked on how good they are at this game. Sadly I had a massive headache while playing this game. But I pushed through it because the Hobbits we having fun and didn’t want to stop them. In the end I lost, and Jax came in 3rd, Lilly 2nd and my girlfriend won. 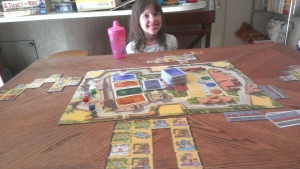 Home of the Nerdy Viking

Just mild-mannered blogger & podcaster! Fighting a never-ending battle for fandoms & sharing all my misadventures in life.

Home of the Nerdy Viking
Powered by WordPress.com.